Fork me on GitHub

While not directly part of the collision detection problem, mesh generation is useful to extend the range of shapes supported by ncollide by discretizing them such that they can be approximated with a TriMesh, a Polyline, a ConvexHull, and/or a Compound. It is also useful to obtain a renderer-compliant representation of non-polyhedral models such that balls, capsules, parametric surfaces, etc. The two main types of mesh generators output are TriMesh and Polyline.

The index buffer may take two forms. In its UnifiedIndexBuffer form, the index of a triangle vertex is the same as the index identifying its normal and texture coordinates. This implies that the coordinate, normals and texture coordinate buffers should have the same size. While not very memory-efficient, this is the required representation for renderers based on, e.g., OpenGL. In the following figure, each disc corresponds to one index (i.e. one integer) and each square to one buffer element:

In its SplitIndexBuffer form, each triangle vertex as three indices: one for its position, one for its normal, and one for its texture coordinate. This representation is usually topologically more interesting than the unified index buffer. In the following figure, each disc corresponds to one index that identifies the type of element that shares the same color:

It is possible (but time-consuming) to switch between those two kinds of index buffers:

The simplest way to build a TriMesh from most primitive shapes defined by ncollide is to import the ToTriMesh trait and call the corresponding method.

This method requires a parameter that allows you to control the discretization process. The exact type of this parameter depends on the type that implements the trait. For example, a Ball requires two integers (one for the number of subdivisions of each spherical coordinate) to be transformed to a TriMesh; the Cuboid however requires a parameter equal to () because it does not need any user-defined information in order to be discretized.

The Polyline is a much simpler data structure than the TriMesh. It does not have an index nor texture coordinates buffer:

Since it does not have an index buffer coords is assumed to be a line strip, and there is no way to let two different vertices share the same normal in memory. This structure is not very practical to model complex 2D shapes. That is why it should be changed to a more traditional index-buffer based representation in future versions of ncollide.

The simplest way to build a Polyline from most primitive shapes defined by ncollide is to import the Polyline trait and call the corresponding method.

This method requires a parameter that allows you to control the discretization process. The exact type of this parameter depends on the type that implements the trait. For example, a Ball requires one integer (for the number of subdivisions) to be transformed to a TriMesh; the Cuboid however requires a parameter equal to () because it does not need any user-defined information in order to be discretized.

Path-based mesh generation exposed by the procedural::path module allows you to create more complex 3D shapes by replicating a pattern along a path. Note that this feature is still extremely immature and at most incomplete. Use with care. 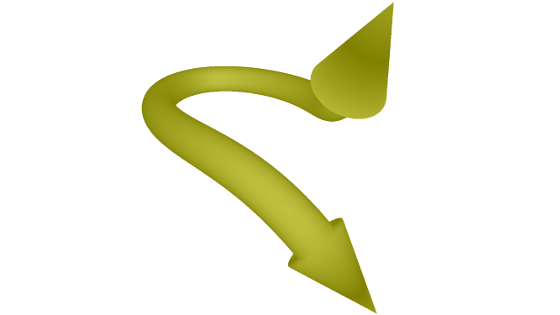 The path-based mesh generation API is based on two traits. The CurveSampler trait is implemented by a structure that is capable of generating a path, i.e., a set of points assumed to form a polyline:

The returned point may be either a StartPoint, an InnerPoint or an EndPoint. If EndOfSample is returned, then the path generation is assumed to be completed. There may be several pairs of StartPoint, InnerPoint inside of the same path. This allows patterns like dashed lines.

Together with the path, we need the pattern that will be replicated at each point of the path. Such pattern must implement the StrokePattern trait.

The stroke pattern is responsible for the mesh generation itself. It has to duplicate its pattern at each point of the path, and to link those duplicates correctly to form a topologically sound TriMesh. This allows you to easily stroke paths with possibly very different shapes and connectivity using the same pattern.

The following example uses the PolylinePath together with the PolylinePattern to stroke the arrowed Bézier curve shown at the beginning of this section.

Meshes can be computed from other meshes as well. This may be useful to make them usable by some geometric queries that have specific requirements. For example most queries on ncollide require the objects to be convex or to be the union of several convex objects. A convex hull or a convex decomposition may thus help to pre-process complex concave meshes.

Besides the ToTriMesh and ToLinestrip traits, the procedural and transformation modules export free functions that generate various meshes and line strips, including those accessible by the two former traits.

It also exposes functions to compute the convex hull of a set of point using the QuickHull algorithm which has an average time complexity:

If you are not interested in the Polyline representation of the 2D convex hull but only on the original indices of the vertices it contains, use the _idx variant of the function − namely convex_hull2d_idx(...). The following example creates 100,000 random points and compute their convex hull. 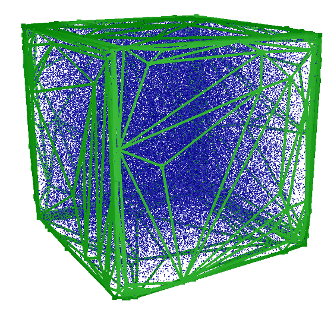 While convex objects have nice properties that help designing efficient algorithms, studies show that using only convex objects leads to very boring applications! That is why ncollide allows the description of concave objects from its convex parts using the Compound shape. For example, one could describe the following object as the union of two convex parts:

But decomposing manually a concave polyhedra into its convex parts is a very tedious task and computing an exact convex decomposition is often not necessary. That is why ncollide implements the 3D HACD algorithm that computes an approximate convex decomposition. It is not yet implemented in 2D.

The HACD is simply a clustering algorithm based on a concavity criterion to separate the different groups. It will group triangles together until the directional distances between their vertices and their convex hull do not exceed an user-defined limit.

To compute the decomposition of a triangle mesh, use the procedural::hacd function. It takes three arguments:

Let us define what normalized concavity means. Because there is no official definition of the concavity of a 3D object, we are using the maximal distance between the triangle mesh vertices and its convex hull. This distance is computed along the direction of the vertex normal (hence, it is usually different from the intuitive distance obtained by orthogonal projection of the point on the closest convex hull face):

Then, to make this concavity measure kind of independent from the whole shape dimensions, it is divided by the object AABB diagonal :

We call the ratio the normalized concavity. In this example, it is equal to .

The following figure shows a tube (left), the result of the clustering done by the HACD algorithm (middle), and the resulting approximate convex decomposition (right):

The following example creates a concave object using a path-based mesh generation and approximates it using the HACD algorithm. Together with kiss3d, this code was used to generate the figure above.

From here you can search these documents. Enter your search terms below.